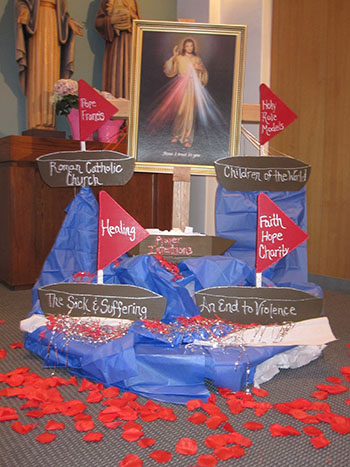 Extraordinary happenings began at Mullen Home the afternoon before the Feast of Divine Mercy. Slowly … softly … the ocean of mercy seeped gently through the corridors of our Home. The unusual colors of the ocean’s water were crimson red and stark white, culminating at the foot of the statues of Jesus, Mary and Joseph on the chapel’s side altar. Those who had just completed the Novena to the Divine Mercy knew instantly the meaning of the appearance of Jesus’ ocean of mercy. That’s when the boats began to appear on the ocean. One boat maker immersed the Roman Catholic Church sailboat with Pope Francis on the sail in the ocean of God’s mercy. Devotees to the Divine Mercy message, being highly aware of Jesus’ request for a religious order who prays for the children of the world, launched a second boat with the words Children of the World printed on the side of the boat and on the sail a prayer for Holy Role Models for these innocent ones. The third boat immersed the sick and suffering, while a fourth sailboat’s prayer request was to end violence by an increase of faith, hope and charity. All throughout the afternoon and evening, a calm and holy peace permeated the entire Home.

As Sunday dawned, the great miracles of the feast of Divine Mercy began to be visibly seen and felt. Confessions began at 9 a.m. and there was already a line forming before the priest arrived. This is almost unheard of in this post-Vatican II era. Mass was beautifully celebrated with high participation by the many attendees. Adoration began immediately after Mass. Monsignor William Jones, a Resident, was immediately asked to hear confessions by fellow Residents. Other guests, who were not able to get into the confessional before Mass kept Monsignor Jones quite busy. During the adoration time, Knights of Columbus from Council #7502 stood reverent guard by the Blessed Sacrament. While the Residents were at lunch, the Ladies Auxiliary #7502 fed the attendees and knights in O’Fallon Hall. The Little Sisters of the Poor graciously invited the guests to eat during the planning of this feast day, but the Ladies Auxiliary declined the offer because they didn’t want to put an extra burden of feeding so many extra mouths on Mullen’s Home budget. In addition to doing the extra confessions right after Mass, Monsignor Jones went back to the confessional during his scheduled time with the words, “I always love to go where Jesus is going to be in a special way.” Monsignor Ken Leone started hearing confessions 15 minutes prior to his scheduled hour. What a miracle! Three priests were kept very engaged in the confessional throughout the day! At 2 p.m. the Rosary was prayed. St. Faustina’s Way of the Cross took place at 2:30 p.m. and at 3 p.m. the Chaplet of Divine Mercy was sacredly prayed.

Jesus gave us His peace and ministered to us all day! We will sing of His mercies forever! 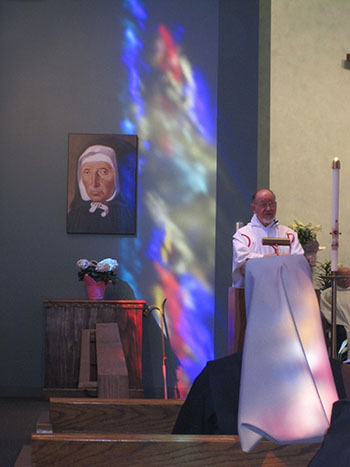 Living Stations of the Cross
Year of Faith Pilgrimage, April 11, 2013