John Paul II through the Eyes of Fr. Jan Mucha:

An Interview with a Polish Priest-Resident of the Mullen Home

Father Mucha is currently living with—and entertaining with his delightful spirit—the Little Sisters of the Poor at the Denver Mullen Home. Hanging on the walls of Father’s apartment are pictures of Our Lady of Sorrows from Poland, other images of Mary and of St. Therese, and pictures of John Paul II, as well as other priests, cardinals, and bishops. There are also some large art pieces representing a beautiful flower popular in Poland.

Fr. Mucha left Poland in 1970. He had been a priest in his native country for 16 years and was a missionary to the United States. The U.S. was a symbol of freedom to the Poles, considering the oppressive regime that they endured. A Polish family was caught saying the rosary in their home by the secret police, and the leaders of the family were brought out into the street and shot dead. Fr. Mucha’s brother was taken and forced to work for a German farmer. He did not speak any German and the farmer became angry and beat him. Some other villagers told him to go to the mayor, which he did, and he was able to begin working for someone else.

Fr. Mucha received a scroll from John Paul II to commemorate the 100th anniversary of the founding of the church where he was the pastor. It reads, as translated by Fr. Mucha: “I give, from the heart, an apostolic blessing to Fr. Janovic Mucha (Mucze), Pastor in Denver, Colorado, U.S.A., on the 100th anniversary of St. Joseph Polish Catholic Church. From the Vatican, December 25th, 2002.” It is signed by Pope John Paul II himself—even though this was done at a time after the Pope was no longer regularly signing documents due to the effects of aging.

Karol Józef Wojty?a was an altar boy, and when he went to do his studies, Cardinal Adam Sapieha (who ended up being the bishop of Krakow for 40 years) asked him what he was going to do with his life. Karol responded that he was going to be an actor. The priest said that this would be a great loss for the Church. To follow his ambition, Karol studied the stage under a young Jewish woman, had a young Jewish friend who nicknamed him Lolek, and lived in apartments for Jews (Wadowice). This gave the young man a unique relationship with the Jewish people of Poland, and one that can be witnessed to affect his time as pope. When World War II began in 1939, Karol was young—just 19 years old. All universities were closed due to the war, so he was unable to complete his studies in a regular academic setting. He studied philosophy and theology under the tutelage of the Cardinal (who had the respect of the Germans) at the Cardinal’s mansion, and began studying for the priesthood. After the war, he went to Rome to complete his studies and earn his doctorate. A French priest paid for his education because Karol had no money and no family, since his mother, father, and brother had all died. When Karol was elected pope, this same French priest had a terrible stroke and was completely paralyzed. As Pope, John Paul II would visit him in the hospital. A hospital visit by a Pope was unheard of by the Italians in those days! 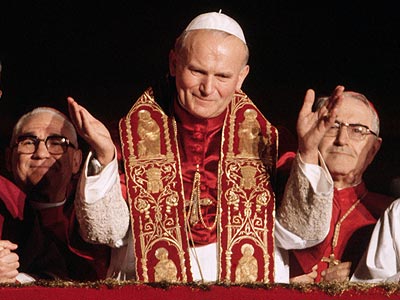 Padre Pio, who carried the stigmata for 50 years and was physically assaulted by the devil, met Karol and told him that he would be Pope, that he saw Karol’s robes covered in blood and that he would be shot. This was hard for Karol to take in. Yet, when John Paul was only pope for thirty-three days before he died, JPII (who then was cardinal of Krakow) thought of what Padre Pio had told him. Cardinal Stefan Wyszy?ski told him that if he was elected, to be sure not to say no. After he was elected, he again told him not to refuse, but to accept. When Karol was elected, he addressed the crowd, speaking to them in the Italian language and saying, “If I make mistakes, please forgive me; I’m from Poland.” He won the hearts of the people in this way.

Fr. Mucha was propitiously in Rome for the inauguration of Karol Józef Wojty?a as Pope! There were about 1,000 Polish people there, including, priests, nuns, and lay people. In the hall of Pius XII, he saw Cardinal Wyszy?ski kiss the ring on John Paul II’s finger, but then JPII kissed Wyszy?ski because he still saw him as his mentor, causing the people in the hall to weep. Fr. Mucha celebrated Mass with John Paul II and also got the chance to speak with him. Fr. Mucha reminded JPII of the time when he was a cardinal and went by a field with cattle, asking the woman there for some tea. The woman was the aunt of Fr. Mucha’s sister-in-law who is here in Colorado. The woman said “Yes, but first could you fetch some water and bring it back?” The Cardinal had agreed and fetched the water, after which she made him tea. It wasn’t until later that she found out who it was whom she had asked to go and fetch water! Also, Fr. Mucha told Pope John Paul that his nieces had sung for JPII in the choir at his inauguration Mass. 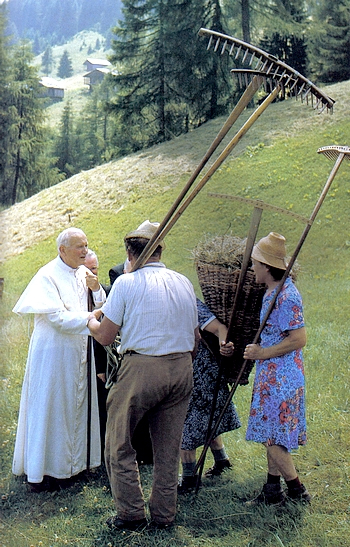 His Time in the Mountains:

Fr. Mucha had met John Paul II when he was Cardinal, at a retreat in the mountains at Zakopane because JPII was giving talks there. John Paul went into the mountains a lot, as he had friends who lived there and because he enjoyed the mountains. He also spent a lot of time at the lakes in northern Poland. He was at the Mazuri Lakes when he received the news that he had been appointed bishop. Though he was not shaken by the news, he said that this would hinder him from finishing his vacation! During World War II he got sick and the doctor said he needed to exercise in the mountains, which he did frequently. When he was going to come to Colorado for World Youth Day, there were thousands of people who would follow him here, as he always had crowds of people who flocked to wherever he was. John Paul said to President Bill Clinton, whose wife and daughter were present, that there were youth from all around the world, even from the White House (Chelsea)! Some in Denver were worried about possible crime and disturbances, even though crafty business people had explained that the pope’s visit would be good for the economy. However, despite the fears, when JPII came the Denver there was no killing, theft, or crime. The youth were gentle, well-behaved, and kind. And of course, John Paul II spent time in the mountains of Colorado!

Fr. Mucha remembers during his years as a young priest in Poland that Karol Wojty?a, who was his Bishop, “Was always very uplifting whenever he visited his people and his parishes. People appreciated that he was always uplifting; that was his characteristic manner.” On an occasion in John Paul’s advancing years, he was walking with a cardinal when the cardinal said, “Holy Father, you don’t walk so well.” John Paul responded, “Thank God that my aging didn’t start at my head, but at my legs!”

There were 5 million people at John Paul II’s funeral. There were three American presidents, as well as other worldwide leaders, kneeling and praying at his casket. Fr. Mucha’s nieces were there and had slept outside in order to be near. Cardinal Josef Ratzinger, our present Pope Benedict XVI, presided at JPII’s funeral and gave what Fr. Mucha deemed to be the most moving homily ever heard—not only by Catholics, but by the rest of the world, too. Fr. Mucha was pleased when Cardinal Ratzinger, this dear friend and devoted coworker of Pope John Paul II, was later elected pope.

[1] With the exception of some editing, the recollections of PJII are in the words of Father Mucha.

Reflections of the Elderly on the Young Who Come to Serve
Drawn by the Charism: My Path to the Association Jeanne Jugan