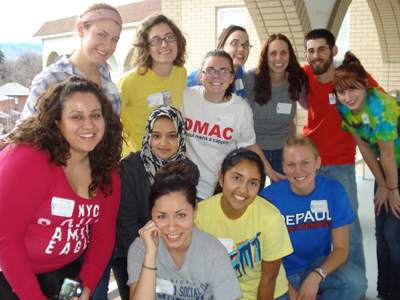 The Little Sisters of the Poor and their Residents were blessed to have a lively group of students from DePaul University in Chicago come to visit them in Denver on a Christmas break mission trip the first week of December. A few young women came on December 1st and 2nd, and the entire group of twelve came on December 3rd for a full day of service. In the morning, they ran an activity for the Residents called “Friday Fitness.” The Residents enjoyed the challenge and got quite competitive! Each student adopted a Resident and cheered him or her on to the goal. Afterward, some students joined the Sisters for 11:00 Mass, while others spent time getting to know the Residents better or helping to prepare for the afternoon’s activities.

At noon the students were given a tour of the home. They were amazed by its history and by the community of the Little Sisters of the Poor, and were touched by many of the stories of the elderly poor who have made their way to the home over the years. The students were in awe of this “anteroom to heaven” that the Sisters provide for their Residents.

After lunch it was “party time,” and music by Johnny B. brought both students and Residents to their feet dancing. Smiles all around, everyone present immensely enjoyed this time together. 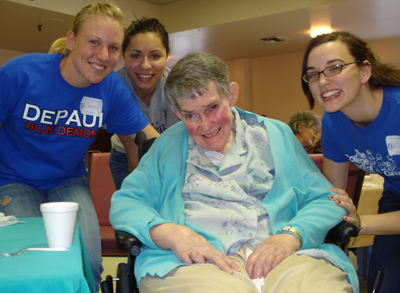 As the day was drawing to a close, the students took pictures with their adopted Residents, as well as some photos of the home. They were excited to find out that the building next door to their dorm back in Chicago is in fact another home of the Little Sisters of the Poor! They look forward to expanding upon their wonderful experience with the Sisters here in Denver, and were excited as they made plans to volunteer at the Little Sisters in Chicago as soon as they returned to the windy city.

Celebrating the Gift of Life at 101!
Gratitude for the generosity of our friends and benefactors