“Go and do likewise…”

World Day of the Sick

Our Holy Father Benedict XVI had proposed in his message for the 21st World Day of the Sick to reflect on the parable of the Good Samaritan. 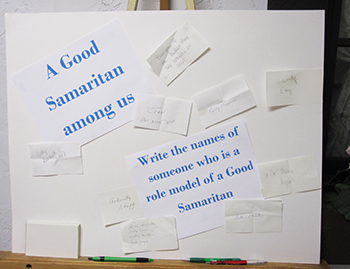 In the morning, we had the Anointing of the Sick during Mass and gathered in the afternoon to reflect further on the parable of the Good Samaritan. Residents, Staff and Little Sisters gathered in the auditorium under the gaze of a statue of Our Lady of Lourdes. Marian Hymns greeted the participants. We prayed in a special way for all the sick and for all care givers and after the reading of the parable of the Good Samaritan, we broke into small groups to discuss the parable further. 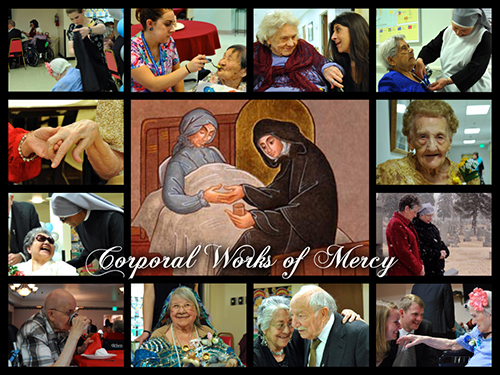 Each group considered the qualities needed to be a Good Samaritan (thoughtfulness, self-forgetfulness, empathy, generosity etc.), found examples of Good Samaritans in their lives (parents, daughters and sons, neighbors or co-workers), and shared experiences of receiving or giving aid to others. One staff member reported that an acquaintance of hers would always carry quarters in her pocket and give one to whoever asked her for money. She figured she wouldn’t want to have to listen to Jesus tell her at the end of her life that she hadn’t helped him. Another Resident reported the aid of neighbors when her mother died at a young age, and her father was overwhelmed with grief and caring for the children. Another Resident pointed out that we often think only of the material aid that we are asked to give and forget the spiritual works of mercy that are in a very real way also means of aiding our neighbors. 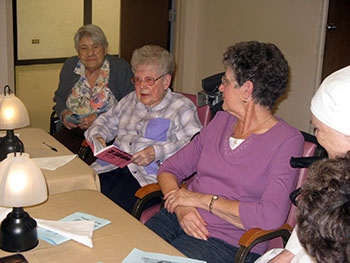 After sharing the results of the group discussion with all participants, everybody was invited to leave a prayer intention for a sick person, to write down a quality of a Good Samaritan (which will be displayed in the lobby), to name a Good Samaritan and to write a Thank-you to somebody who has been a Good Samaritan to him or her. The prayers notes will be taken to the chapel and be included in the prayers of the faithful during Mass. Very impressive were the openness and depth of the discussion between Residents, staff and Little Sisters, and we know that without the first act of kindness of St. Jeanne Jugan, when she sheltered the first homeless woman in her own apartment, we would not be able to celebrate the World Day of the Sick in our Home today! 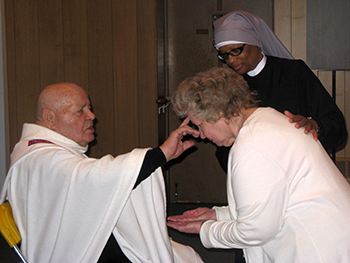