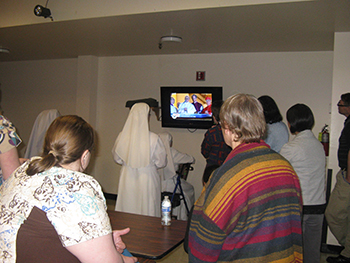 It was a little after noon on March 13th, when suddenly everybody rushed to the TVs. The smoke was WHITE!

What a surprise to hear the name “Francesco” as the new name of the Pope. The humility and simplicity of St. Francis is surely needed in our world today. St. Jeanne Jugan herself, though more in the line of the French School, always reminded the Little Sisters novices among whom she lived at the end of her life: “ Be little, very little, very humble before God.”

Father Eloi Leclerc, an elderly Franciscan priest and writer, has beautifully captured the essence of Jeanne’s charism as foundress in his book, The Desert and The Rose:

“One notices a theme that comes up again and again in Jeanne’s recommendations to the novices: “Be little, make yourselves very little,” she would tell them. It was a kind of refrain. Indeed, she was convinced that in order to be close to the humblest and least, you had to become little yourself. You cannot establish truly close links while keeping your distance or placing yourself above others. The most high Son of God himself became the humblest of men in order to be close to all.”

After having been in our own “conclave” we knew the Cardinals were happy to have chosen a worthy successor to St. Peter, the one whom the Holy Spirit designated. Just like he chose David, God chose Pope Francis, according to his heart not according to the appearances (1 Sam 16:7).

And from Pope Francis himself an encouraging message for his brother cardinals referencing their “old” age:

“Courage, dear brothers! Probably half of us are in our old age. Old age, they say, is the seat of wisdom. The old ones have the wisdom that they have earned from walking through life. Like old Simeon and Anna at the temple whose wisdom allowed them to recognize Jesus. Let us give with wisdom to the youth: like good wine that improves with age, let us give the youth the wisdom of our lives.” – Pope Francis