By Sr. Mary Augustine of the Trinity, lsp 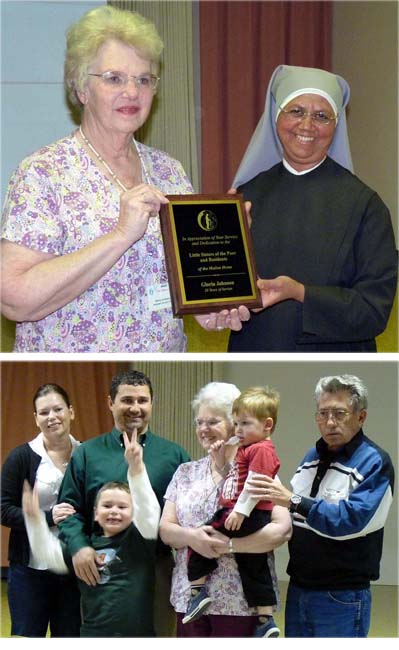 One day back in 1981, Mother Celine de la Visitation—then local superior of the Little Sisters of the Poor in Denver—hired Gloria Johnson, a bright and promising young registered nurse, and welcomed her to the staff of the Mullen Home. Now, twenty-nine years later, Mother Celine serves at the motherhouse in France as superior general of the congregation, and Gloria, long-time Assistant Director of Nursing, is being honored on the occasion of her retirement from all those years of devoted service here at the Mullen Home. It certainly won’t be the same around here without Gloria! She really has the spirit of St. Jeanne Jugan in her loving and caring ways.

All of our Little Sisters, staff, and residents tried to express their gratitude to Gloria during her retirement party on November 30th—but how do you thank a person for all the various ways in which she helped so many people during those years?!? Not only is Gloria a great nurse who has helped so many residents feel better, but she has uttered many encouraging, sympathetic words, held many a hand, given and received millions of smiles, and often breathed a quiet prayer for the many elderly poor who have gone before us to their heavenly reward. We’ll let God thank her for us as she now becomes a full-time Grandma…but don’t be too sad! We’ll see Gloria and her husband Bill often, as they are members of our lay Association Jeanne Jugan, and will continue to participate actively in the life of the Home.

Thank you, Gloria, for truly living the

An Awesome Discernment Retreat Day
Celebrating the Gift of Life at 101!