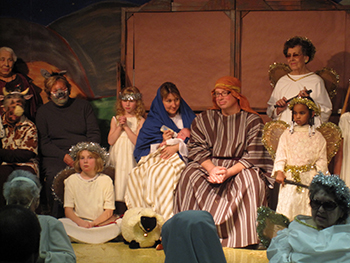 We are wondering if you have the same questions we had this Christmas? Do you ever wonder about the figurines we put out in our Christmas crib each year? Who are they? What do they represent? There are some we know very well, such as the shepherds, the angels, the three Kings, the cow and donkey and of course, the Blessed Mother, St. Joseph and the most important, the Baby Jesus.

But all the others that you may see as well … the girl with the water jug, the woman holding a basket with fish another with fruit, the man selling bread. the man holding a rabbit, the miller who carries his flour. The young couple … and there are more! But who are they? Why are they in our Christmas crib? During Christmas, we put them all over the stable, where they feel right at home.

These figurines are immobile, stationary, but on the weekend of December 15th and 16th, these figures came to life and have broken their silence to tell us how the Baby Jesus came into their lives and the miracle that happened to them! Yes, our home was transformed into the a little Bethlehem for the annual Christmas Play. The play was based on a French Christmas play called “Les Santons de Provence” but we entitled it “Les Miracles of Christmas”! Each figure “came to life” (a miracle that happens every Dec. 25th). 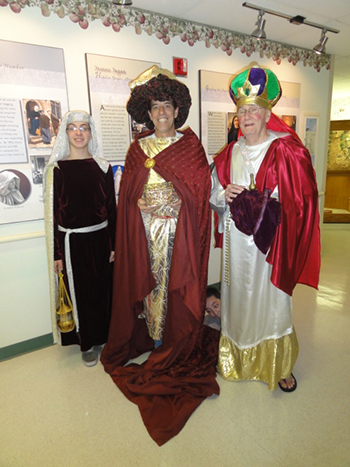 The miller, who was very lazy, told us that story of how the angels came to grind the wheat into flour for him and he was so astonished that he had to bring the flour to the Baby Jesus. The woman who was going to sell the fish, even though, she had had it for 8 days, but when she went to look at them, they were so fresh that you would have thought they were just caught and she too, went to see the baby Jesus to offer Him her fish. The shepherd whose dog had died but miraculously came back to life. The thief who was converted and the policeman became his fries, the young woman who finally got her father’s approval to marry the “man of her dreams.” There were so many miracles but these are just a few!

Invitations were sent out weeks in advance to the residents’ families who responded in large numbers. The residents, employees and volunteers worked on the play for weeks, when the day came for the performance, it was done “à la perfection”, they were so happy, but to tell you the truth, it was hard to tell who were the happiest, the residents, their families or the little sisters, the words of St. Jeanne Jugan echoed in our hearts: “Make the elderly happy, that’s all that matters.”