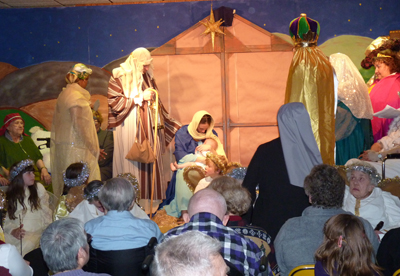 Saturday, December 18, the home had a festive air.  The residents, AJJ members, employees and their children worked for months to put on a play for the Little Sisters, the residents and all their families.  In the afternoon, there were many angels with their halos and wings, shepherds with their sheep and Kings with their gifts, walking here and there throughout the home.

Before the play started Fr. Tim put everyone in the Christmas spirit by playing Christmas songs on his guitar.

Teresita Polzin gave everyone the history of how the Christmas cribs that we have in our homes started and it was all done in poetry.

The title “The cow and the donkey at the stable of Bethlehem” gave us an idea of the play before it started.  It’s Christmas, the night of wonder and miracles and there was no surprise when the cow and donkey started to speak.  They realized that there “was something new in the air” and with the visits of the shepherd, kings and queens (yes, the queens came too, even though “this is not in the gospel” who were all “looking for something” they knew it had to be close.  The star that was “so bright, that it hurt their eyes” was a clear indication that the Baby Jesus was coming and would be born in their stable.  What a commotion, they wanted to clean the stable up, but instead they had a fight and the hay was all over the place, fortunately the angels came before Mary and Joseph and cleaned everything up.

Soon, Mary and Joseph came to the stable and the Baby Jesus was born, there were so many angels  –  from the ages of 6 to 99, some were wheelchairs, too many to count!  The shepherds were also a wide variety of ages and were numerous.  Everyone sang to the Baby Jesus in their languages: English, French, Italian, German, Spanish, Vietnamese and one of the many languages from India.

This was followed by a pot-luck dinner provided by the Little Sisters and the families of the residents. It was hard to see who was the happiest the Little Sisters, the residents or their families, the employees….we knew that St. Jeanne Jugan was smiling from heaven at our little family so happy to be together.