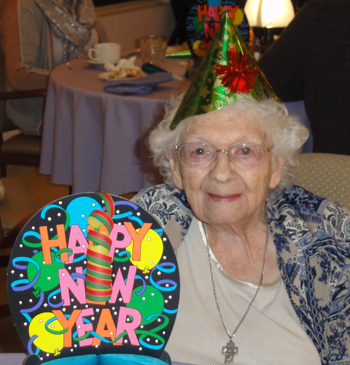 As Residents began gathering for the evening festivities, they were each greeted by friendly faces and an elaborate display of decorations in the dining hall.  Upon taking their seats, Residents were eager to adorn their heads with party hats. After a delectable meal including ribs and Sr. Joseph’s homemade tiramisu (mmm…mmm…) the evening’s entertainment was kicked off by the skillful hands of Bernie Boo on his accordion. The Residents sang to favorites like “Edelweiss” as they anticipated the arrival of the new year. Mullen Home Resident Richard spearheaded a Congo line around the dining hall, and Residents Ismael and Maria took to the dance floor with the Little Sisters, kitchen staff and volunteers. Buttons the dog even made a special guest appearance to provide his bark to the always favorite song, “How Much Is That Doggie In The Window?” As the clock approached the final hour all joined in a unified countdown to zero and everyone erupted with noises makers, smiles, laughter, hugs, and merry wishes of “Happy New Year!” followed by the traditional singing of “Auld Lang Syne.”  What a joyous and memorable celebration it was!