Follow the Yellow Brick Road to St. Paul and to St. Louis 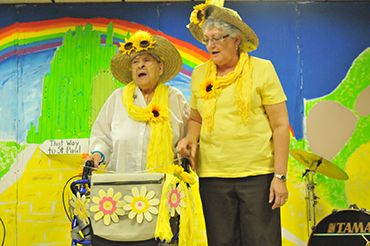 How do you put a play on for two Little Sisters who are leaving, without them knowing? Somehow the Residents and Employees of Mullen Home were able to do it! They practiced in so many hidden ways, the Little Sisters were sent to the airport or distracted purposely by other things, they had no idea what was going on. Going away on retreat helps, too! The Hospitality Club with the help of students and the volunteer coordinator painted the background scene without either Sister being aware of it! They must have used magic!!!!

Finally, the day came: “Follow the Yellow Brick Road: this way to St. Louis, this way to St. Paul.” Yes, the magic Land of Oz came alive for Sister Mary Agnes, who is going to St. Paul and Sister Joseph who is leaving for St. Louis. The first scene was Dorothy as a young girl playing with a hula hoop, and she never missed a beat with her hula hoop! But trouble was brewing even then. All of a sudden, the Wicked Witch of the West (Resident Jeannette Simpson) was seen circulating around her on her three wheeler bike (with had a broom attached at the end of it!). 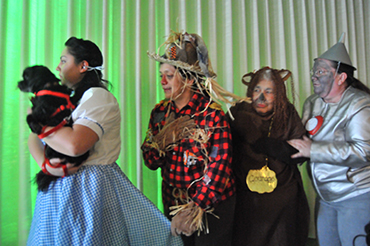 When she arrived in the Munchkin Land, we could see the Wicked Witch of the East’s feet at the base of her house, she was greeted by the Munchkins of the Lollipop Guild ( Nurse Judy Rodnick, Resident Ishmael Carillo Cervantes, volunteers Johnny and Rebekah Horton), who welcomed her to their city. The Coroner (Resident Tim Lavis) comes on stage to pronounce the Witch dead and Dorothy (CNA Janine Sanchez) follows the yellow brick road to Oz to encounter the “Great Wizard of Oz” who will help her go back to Kansas!

Along the way, she meets the scarecrow (Evy Graziano), who sings the woes of not having a brain. Dorothy invites him to go with her to see the wizard and soon, she is met up with the Tin Man (Debbie Miller) and Lion (Resident Anita Duran). There is a “field” of Sunflowers who look just beautiful that you had to stop to admire them. Residents Millie Morgan, Faye Gettler, our Resident Accounts Debbie Williams and Miss Sunflower Queen of 1973, Receptionist Kathy Davis perform “You are my Sunshine.” Sunflowers are even on the walkers! But the trip is not an easy one. The Flying Monkeys (Elaine Eden and Harriet Byrd and our two restorative aides) were numerous and although they sang, they did not incite confidence!

They reached the Wizard of Oz (Helen Reichenbach) but were asked to bring him the Wicked Witch of the West’s broom to him. At the witch’s palace, the guards were marching and watching, three of the guards played musical instruments – electric guitar, trumpet and drums – Paul (Housekeeping), Paul (Kitchen) and Hank (CNA) to help the other guards keep time marching! All of a sudden, Dorothy met up with the witch. There was a fight and Dorothy threw water on the witch, to the surprise of all, the witch melted in front of our eyes!!!!! Dorothy held the broom up as high as she could to the joy of everyone.

The show was appropriately ended by a poem by Theresita Polzin, who assured the two Little Sisters of our prayers and our gratitude for all they have brought to our Home. We will miss them and wish them God Speed to their new missions!