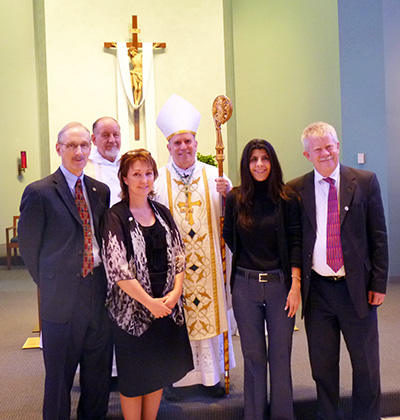 Have you ever been so excited about an event that was going to happen and the morning of that extraordinary happening you woke up with a song in your head? You know, one of those songs that stay with you the whole day long and you just can’t stop thinking about it! Well, the song that hit my consciousness (full blast) upon awakening this snowy May 1 morning was THIS IS THE DAY! This is the day that the Lord has made. We will rejoice and be glad in it. All morning long while I was preparing and dressing for the renewal of our promises ceremony at Mullen Home, this fun beautiful hymn continually played nonstop in my head and I must confess reverberated through my lips at a somewhat high volume. 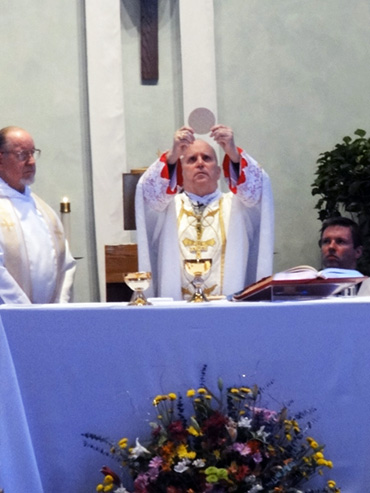 Warm greetings were exchanged while the four new AJJ members and returning associates gathered with Mother Cornelia in O’Fallon. A well done PowerPoint that highlighted the mission, vision, and values of the Little Sisters of the Poor was viewed. It was an excellent review of what Sister Mary Agnes taught us in our yearlong formation classes.

By and by, our location changed to the replica room of St. Jeanne Jugan’s simple abode. This is where the Little Sisters of the Poor’s order began by Jeanne bringing in an elderly blind woman and caring for her. In this awe-inspiring room we prayed, sang, and reflected upon what the Lord was calling us to do.

After the prayer time, Mother explained about the picture entitled Jeanne Jugan’s Dream. We learned that in the 1800’s after missions were given the people in France erected a large crucifix on the site in remembrance of their faith in Christ. There sitting on the base of this monument, Jeanne exhausted from a begging outing falls asleep. God in His infinite mercy showed Jeanne the future of her order in a dream. The three little girls represented Faith, Hope, and Chastity while the dog represented fidelity. The elderly poor women represented the work of caring for the aged poor. The ocean and mountains represents the expansion of Jugan’s order across the world. The motherhouse at La Tour was beautifully finished. 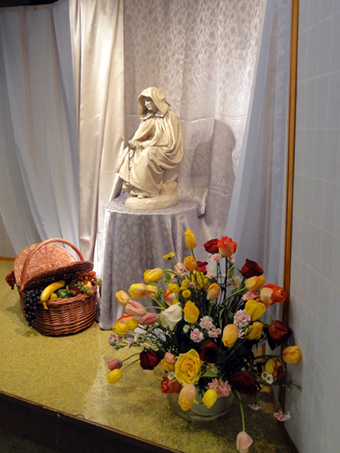 The eucharistic celebration was presided by Archbishop Samuel Aquila. In his homily the archbishop spoke about St. Joseph’s vocation and his work. The moving point that he made so clear was about how God has a plan for each and every one of us. And the work God gives us can only be accomplished by us and nobody else. Following the homily, the four new associates made their promises individually and were given an AJJ pin by Mother Cornelia. Following the new AJJ promises, the returning AJJers stood together and made their promises as one united group.

After Mass and a group picture, we all went to the awesomely decorated auditorium. There on the stage was a statue of a very tired begging sister known as Sister Mary of the Cross (aka St. Jeanne Jugan). Surrounding the statue was beautiful arrangement of flowers. The tables were set and decorated with lovely china on perfectly ironed tablecloths. The archbishop, Father Matt who accompanied Bishop Aquila, Father Jan Mucha, a resident priest, Father Tim Kreman, OSM, our chaplain and Little Sisters, joined the AJJ members for a delicious lunch.

Thank you dear Lord for this work You have so graciously called us to do and the many blessing you give to have this worked accomplished.

And a very happy feast day to you St. Joseph!!

This is the day that the Lord has made. We will rejoice and be glad in it.

Follow the Yellow Brick Road to St. Paul and to St. Louis
DURING THE YEAR OF FAITH – The Mullen Home Rosary of Faith