Living Stations of the Cross

“Stations of the Cross” are a familiar devotion during Lent, but what about “Living” Stations? Movies and music can help us appreciate the central event of our salvation. But watching it live? Close-up? It really is awesome! 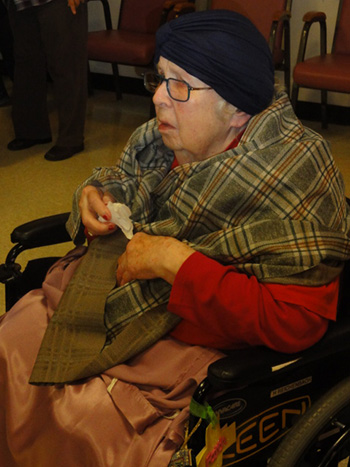 As in the previous year, Residents of Mullen Home were engaged with young people to depict the life of Jesus from the entrance into Jerusalem until his Resurrection.

The Wednesday of Holy Week, our Ground Floor looked like Jerusalem. It started in front of the kitchen where Jesus entered the “Holy City” and we, with palm branches, sang his praises: “Hosanna to the Son of David.” He went into the Temple and overturned the money changers. The O’Fallon Room was transformed into the Last Supper and it was very moving to see “Christ offer Himself to us as the Bread of Life.” The Garden of Gethsemane was the next Station, Jesus in agony while we slept. Judas came with a group of soldiers and Jesus was arrested and brought before Pilate, who tried to proclaim him innocent but the crowd shouted all the louder: “Crucify Him, crucify Him” and he washed his hands.

Then the Cross. The way to Calvary had begun. Jesus holding it, falling under its weight, meeting his mother, a very heartrending encounter. Simon, a Resident, was there to help carry the Cross and Veronica gave Christ the comfort she was able to do. The women of Jerusalem, Residents, most of them in wheelchairs, gave their all by crying and lamenting over Jesus. The third fall was poignant but with the help of Simon and the guards, Jesus was up again. He was stripped of his garments and nailed to the Cross, just the noise of the hammer on the Cross made us shiver. There on the Cross, He forgave the Good Thief and gave St. John and all of us His Mother as our own. All was accomplished and Jesus died, he was taken from the Cross and laid in a tomb. 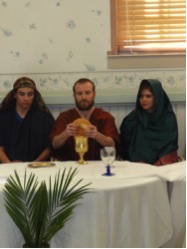 The guards watched but when the stone rolled they became frightened and ran away. The women came to the tomb but an angel told them that Jesus was not here but has Risen. Two of them ran to tell the Apostles, but Mary Magdalene stayed there crying until she saw Jesus who called her by name.

It was a very moving and real way to make the Stations of the Cross. The event home what Our Lord suffered for our Redemption.

Click here to view a photo slideshow from this event.