My Experience of WYD in NYC

By Jessica McArthur
University of Wyoming at Laramie
Class of 2014 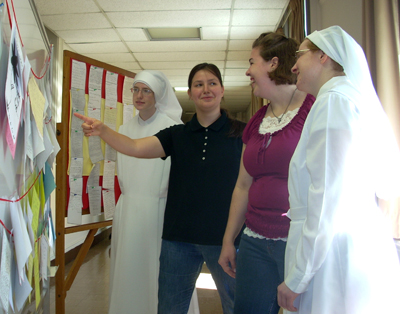 At St Anne’s Novitiate in New York, the Little Sisters of the Poor hosted a World Youth Day event. While following the same format as World Youth Day in Spain, the novices and Little Sisters incorporated many elements of their own spirituality and lifestyle into the event. Participants were invited to pray Lauds, Vespers, and Compline, attend daily Mass, and meditate on the mysteries of the rosary, in addition to participating in the catechesis World Youth Day. Sharing this time of prayer with the Little Sisters and novices, a pilgrim could see the reason for these women’s joy. It’s the joy of a life built on Christ. These women showed that being “planted and built up in Jesus Christ, firm in the faith” brings a life radiant with joy. The simplicity of life given to them by St. Jeanne Jugan, their foundress, magnified the peace and joy in their hearts. No pilgrim could miss this stellar example of “planted and built up in Jesus Christ” surrounding them, which the Little Sisters witnessed through the Sisters at the Novitiate and at Queen of Peace (the neighboring home for the aged).

The energy of the crowd in Spain was not entirely from being “Planted and built up in Jesus Christ,” but perhaps at times partially just a crowd of thrill seekers. This is an illustration of the fact that faith is a personal thing first which builds up and is nourished from a faith community. As reflected on in the Sunday homily of WYD in NYC, pure enthusiasm does not necessarily show faith. Instead, those who listen in silence for Christ asking themselves “And who do you say that I am?” and answer “The Messiah, the son of the living God” will be “firmes en la fe” (firm in the faith). Though I was not present in Spain for World Youth Day, from the Little Sisters’ event, I received just as worthy, if not a better example of being “planted and built up in Jesus Christ.”

A Dream Fulfilled: Dedication and Blessing of Our New Grotto
Getting to Know the Mother of Our Family