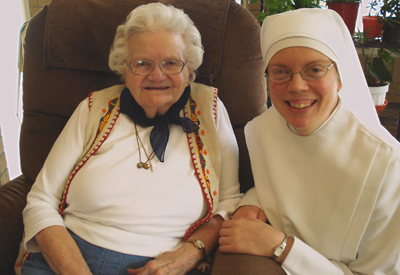 “Religious life is the Church’s best kept secret. If young people really knew how freeing and fulfilling the religious life is, the Church would have a hard time building convents quickly enough.” (Sister Dara, 2011) Freeing and fulfilling. These words struck me as I spoke with Sister Dara, the youngest of the Little Sisters of the Poor in Denver. Wouldn’t we all love to live a life free of worry and overflowing with fulfillment? The answer is yes, however with this fulfilling life come the four vows of chastity, poverty, obedience and hospitality, which are intimidating to most.

Chastity and poverty. The first two vows of chastity and poverty are seen by many as a sacrifice they would prefer not to make. The idea of sacrifice itself tends to make people quiver and avoid the situation. However, the word sacrifice is Latin derived and defined as “to make holy”. To sacrifice one’s life is to make one’s life holy. When put into this perspective, suddenly the daunting word “sacrifice” no longer seems to hold its negative tone. The idea of sacrifice is turned into a heroic and beautiful phenomenon. The Little Sisters of the Poor are a witness to the world defining how one can lose their life so as to find eternal life and joy. Without the material distractions of our society, the Sisters can be fully devoted to the Lord. As Sister Dara said, “We are made with a soul that can be filled only by God. The response to Christ’s total gift of Himself to us is our total gift of ourselves back to him.”

Obedience. Another vow made by the Little Sisters of the Poor is obedience. “Honor thy mother and father” is one of the Ten Commandments relentlessly repeated by parents as children grow up. Why then does it seem that a vow of obedience is worrisome for most? The Lord God is our Father and we should all strive to live a life in obedience to Him. As Sister Dara notes, “We as a society like to consider ourselves in the driver’s seat. If one is going to follow the Lord, you have to let Him lead.”

Hospitality. The vow of hospitality is seen every day as the Little Sisters of the Poor care for, support, and create a family for the elderly in their care. Our society of today has often been referred to as the “me” generation. As children grow up they strive to become educated, to create a plan for their life and to succeed. The focus is not on others, the focus is on themselves, the individual, and how they can create a life they personally desire. Sister Dara wisely notes, “As people breathe this individualistic air, they don’t realize it chokes our soul from God.”

As I spoke with Sister Dara, she demonstrated a calm and peaceful nature, which for me showcased the fruits of her labors and sacrifices. We, the members of the Church, need to give support to those who feel they are being called to the religious life. As Sister Dara said, “Religious life is the Church’s best kept secret. It should never be kept secret. Especially now, the world is starving and doesn’t realize it is hungry. God knows the needs of the world, so He must be calling people. If you feel called, make concrete steps—visit a seminary or a convent, and talk to priests and religious. Don’t keep it in your head, it is a gift. God doesn’t force gifts, you must accept them.”

A New Year’s Message from Our Chaplain
On a Mission