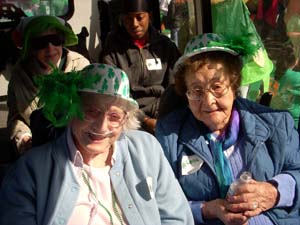 Some would call it the luck of the Irish, but we know it was Divine Providence that sent us such beautiful weather for the big St. Patrick’s Day parade here in Denver on March 12th. God also sent to us Little Sisters of the Poor many wonderful volunteers to assist us in bringing a group of our residents downtown to participate in this event.

Billed on the parade’s website as “the biggest St. Patrick’s Day parade west of the Mississippi”, this event typically involves 10,000 parade participants and draws 120,000 spectators. So there in the heart of Denver, college students and other young adult volunteers decorated our bus, carried our banners, and accompanied our residents along the parade route. As we made our way up one street and down another, we noted that the crowd was almost as exuberant as we were! After this incredibly fun day we headed for home–grateful for the awesome time we had had and for the friendships we had shared among ourselves and with our young helpers.

Let’s hear now from a few of our parade participants:

“I had a wonderful time! The crowd was very receptive. They clapped when they saw us.”

“It was most beautiful! And our young helpers were great. I was overwhelmed. I felt deeply honored, like I was advertising for the Little Sisters of the Poor.” 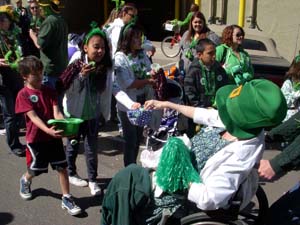 “This was the first year that our residents actually were assisted out of the bus and pushed down the parade route in their wheelchairs, in the open air. This gave them the opportunity to give candy to the little children along the route. They were delighted to give. They were so generous that their sacks were empty in five minutes!”