You are filled with goodness: discernment Day, November 5 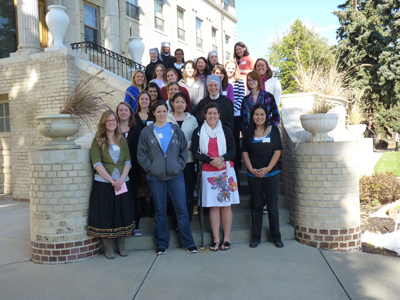 Along with some beautiful Denver sunshine, 20 young women came to our Home on Saturday, November 5, for a time of prayer, silence, and discussion with the Little Sisters. Arriving from Montana, Wyoming, Nevada, and all over Colorado, each one seemed very eager to learn about the religious life and serious in discerning the Lord’s will in each of their lives. After a brief welcome and introductions, the day started with Mass with our Residents. The main celebrant was Fr. Jerry Rohr, pastor of St. Rose of Lima parish and newly appointed dean of West Central Denver. Fr. Jerry gave a beautiful homily using his own vocation story to encourage the young women to be Christians and say “Yes” now, and not “what-if” when it is too late. The Mass ended with Exposition which led the young women into the silent and contemplative part of the day. Over the next 1.5 hours the women had the options of prayer and adoration, the Sacrament of Reconciliation and 1-to-1 vocation accompaniment with a Little Sister.

Lunch began at 1:00 in the auditorium with Fr. Jerry and the Sisters. One described it well by saying “Real food!” (To college students, a home-cooked meal means a lot!) This was a great opportunity for sharing, with the Sisters intermingling among the retreatants. Several took this chance in an informal setting to ask some of the questions they had. Their happiness and excitement to meet other peers who were considering the religious life was clearly visible. Father Jerry then gave his 2nd conference, confessing to be a “60’s child” and therefore utilizing some lyrics from songs of his day to illustrate the journey we each make with Christ. Moving into a large circle, several of the Little Sisters gave some reflections including the following topics: challenges of discernment, the four vows of chastity, poverty, obedience and hospitality, living daily faithfulness and being missionary. During the lunch and discussions, some of the Residents had been taking turns keeping vigilant prayer before the Blessed Sacrament, and now it was time to rejoin them and close our retreat with Benediction in the chapel. The day went so quickly, so many of the young women stayed on to ask for advice, have a tour of the Home, or learn about St. Jeanne Jugan. We look forward to having several return to volunteer at the Home and experience the joy of serving our Residents!

Home of Western Tradition
Who is Juanita Acevedo?