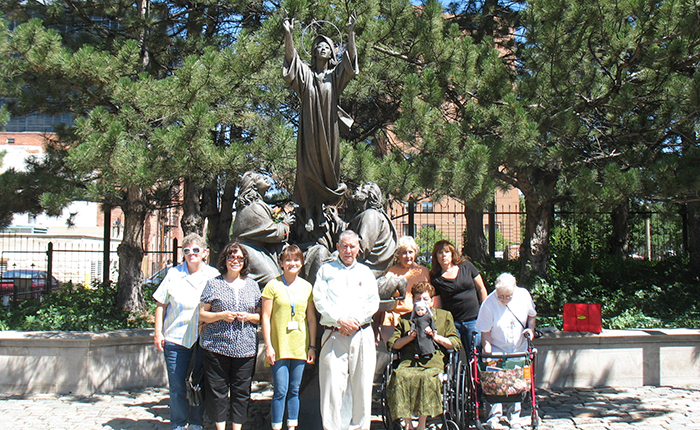 To honor our Blessed Mother on the Feast of the Assumption and pray for vocations, a group of Residents enjoyed a pilgrimage to the Denver Cathedral accompanied by members of the Association Jeanne Jugan. Around 11 am our devout pilgrims arrived at the Assumption Garden next to the Cathedral. This garden was created to honor St. Pope John Paul II’s World Youth Day visit on August 15, 1993. Here 21 years later, we had the privilege to say the rosary together. 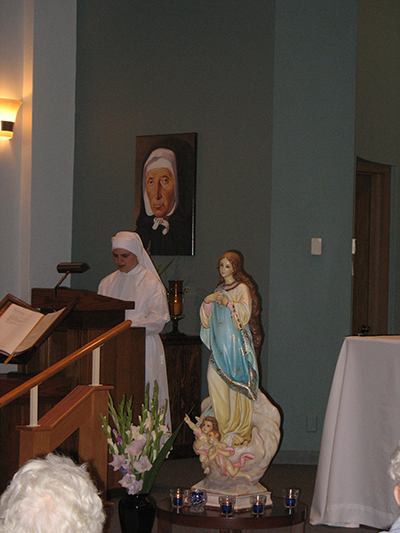 As we entered into the Cathedral for Mass, we saw the huge east window dedicated to Mary’s Immaculate Conception. The ribbon underneath this scene stated that it was donated in memory of John and Katherine Mullen, a reminder of how generous the Mullen family has been to the Catholic Church of Denver.

After Mass, we walked over to McDonalds, enjoyed the lively conversations, and headed home to rest up for the evening’s procession.

After supper, Residents, Little Sisters, and volunteers processed from the auditorium to the chapel saying the rosary. The chapel was set up beautifully with the statue of the Assumption of Mary placed in the center in front of the altar.

As we entered the softly lit chapel, our vigil candles seemed to sparkle like individual stars as we placed them carefully around the statue.

Like Mary, may we too fix our eyes on the things of heaven, with our feet firmly planted on the ground!

Ice Cream Brigade
Preparing for the Feast of Jeanne Jugan