OFF TO THE ZOO! 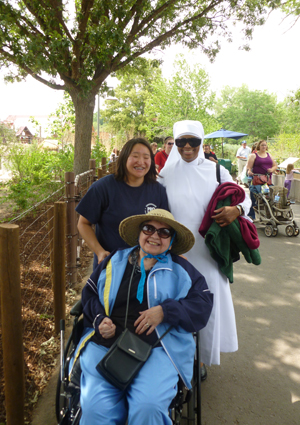 Sr. Joseph hatched a plan to take some of the second floor Residents to the zoo. So off we went with 9 Residents, 3 Sisters, and a group of volunteers. Our day was delayed by an evacuation drill, but soon we were loaded in the van and on our way. We were all excited about the prospect of seeing the new elephant exhibit. Gratefully, the weather was only in the 80s. Earlier in the week the temperatures were in the 100s so it was a blessing for us all that it was cooler. It was a free day at the zoo so there were a lot of kids enjoying the day. We all liked watching them, and one of the Residents, Kitty, remarked that she had never seen so many kids. An interesting comment from a woman who raised 16 children and spent many of her days at summer picnics and reunions with kids and grandkids! 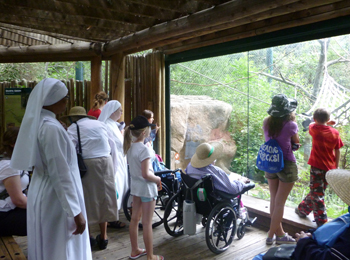 We had lunch when we arrived which was kindly provided by Kevin McNicholas, the zoo concessions owner and a dear friend of the Sisters. Everyone really enjoyed the food. Since the zoo is so large, we weren’t able to visit all of the exhibits though we saw a lot of beautiful animals: giraffes, pink flamingos, bears, zebras, camels, and tons of monkeys. We did see about four elephants but it was nearing the end of the day and they were busy cooling themselves in the shade. The new, young male elephant was swimming and putting on quite a show. At day’s end, we all enjoyed some delicious ice cream before boarding the bus. We had a sing-a-long on the bus as we made our way home through scenic downtown Denver. The Residents were pretty exhausted but they loved their day of watching all the animals – and all the kids!!

LET’S GO FLY A KITE!
SOMETHING ‘FISHY’ IS GOING ON AROUND HERE!