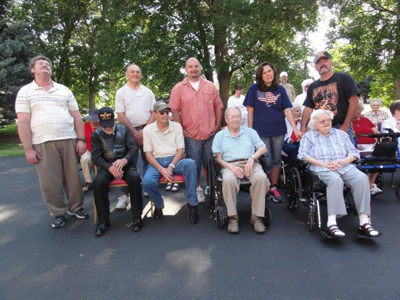 United with all Catholics and under the direction of the US conference of Bishops we joined in prayer for our country and its leaders that they would enact just laws that will fully respect religious liberty.  Each day at Mass there was a petition for this intention, and throughout the 2 weeks several holy hours included readings and songs appropriate to this theme of freedom. Efforts were made to spread the word to encourage and invite several people for these times of prayer, even though several were unaware of the meaning of Fortnight for Freedom.

July 4th was indeed a glorious day in every way … the weather was perfect, blue skies, sunshine and a gentle breeze. At 9:30 am we had a Flag Raising Ceremony, (all our Veterans were prominently placed). Our Residents were escorted to the area by volunteers and AJJ members. A J Nixon, AJJ Member and who had been in the Marine Corps for 20 years, did the honors of raising the flag while the Pledge of Allegiance was recited. Both readings and patriotic songs filled the air as all present were “Proud to Be an American.” Patriotic songs were sung during Mass which followed, and everyone sang with their whole heart.

A picnic in our beautiful yard followed, with several family members of the Residents joining us. In the midst of the festivities we had the drawing of our Raffle, of which the following were the lucky winners:

The day culminated with a holy hour to pray for Religious Freedom. 9 p.m. came too quickly as we were ready to watch the fireworks, for which several family members gathered with the Residents on the 1st floor patio. There were a lot of oos and aahs as the many displays seem to outdo each other. Needless to say that everyone went to bed content and happy, feeling blessed in so many ways.“Long may our land be bright with Freedom’s Holy Light. Protect us by thy might, Great God our King.”

“Prayer in the Square”
Steubenville in the Rockies Youth Conference Weekend